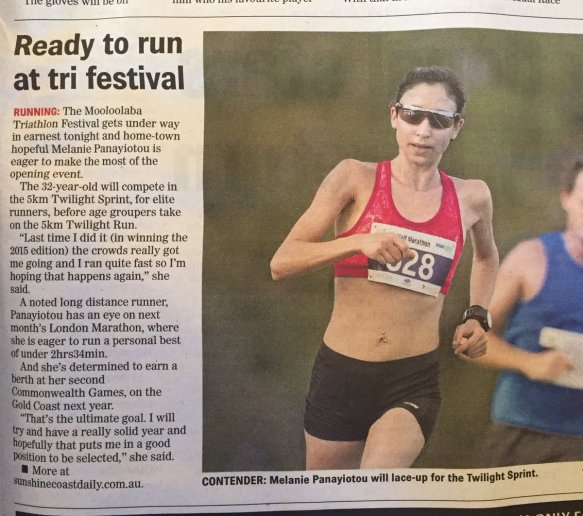 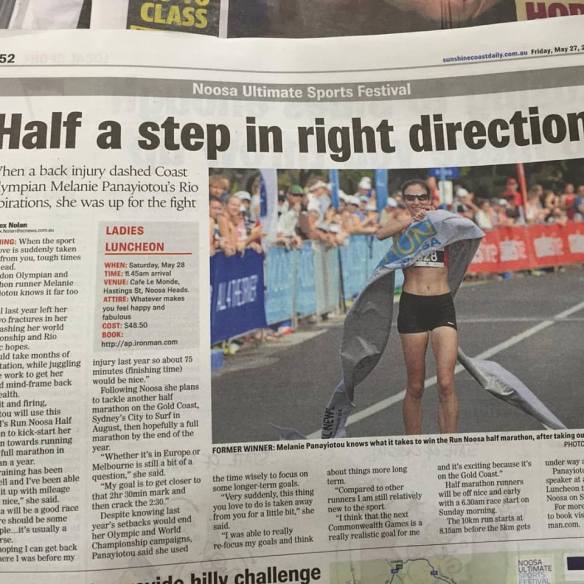 It’s about time for an update, and the timing is great, as I’m finding myself setting goals, feeling fit and “loving every step of the way”!

Despite a rocky road last year with a big break from running, I still remember 2015 as the year I ran a PB, was selected for the World Championships, gained an Olympic qualifier, and placed 4th at the Rotterdam Marathon (yes, all in one race). I don’t think anyone believes marathons are easy. To be able to improve at each race so far is not only reassuring for myself and my coach, it’s also very motivating to keep pushing the limits and searching for new goals. And in the end, limits are mostly self-imposed so why not challenge them? 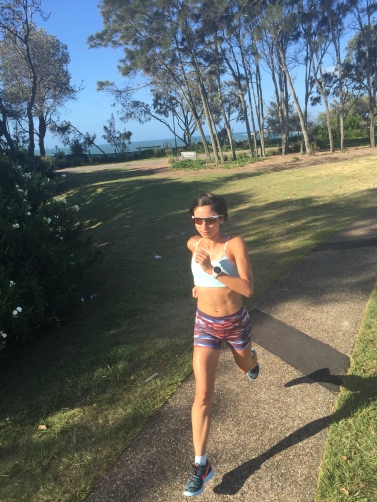 Goal setting is really important and something I’ve talked to a lot of runners about. There are the smaller goals to focus on, such as achieving a certain pace in your track session or hitting a weekly mileage, and there are the bigger goals such as a big race, a new PB or even a championship qualifier. For marathon runners these goals might stretch out over years, and that means you need to reward yourself with the intermediate goals along the way. But something else that I say to runners is ensuring you keep the enjoyment in the sport; that’s why you run in the first place, right?

I’ve got some big goals ahead of me, and I’ve got a few smaller ones to think about along the way. An obvious one for me is improving my speed in the shorter distances. To give you some insight, my 10K and half marathon PBs are the 10K and half marathon splits at the Rotterdam Marathon (which is also my marathon PB)…. So in keeping the bigger goals firmly in front of mind I plan to get involved in the local races that I love and use these events to improve my performance. Next on the calendar will be Noosa and I hope to see you there!

An unlucky accident derailed me for most of this year, so it’s fair to say that I won’t be sad to say goodbye to 2015.

But coming through the other side I am looking forward to welcoming 2016. Dream BIG and make it happen!

I’m very disappointed to say that I sustained a minor injury from a fall I had several weeks ago and sadly I have been forced to withdraw from the marathon at the World Championships in Beijing. I am receiving treatment but the obligatory “no running” period has interrupted my training and I would not have been at my best to represent Australia.
Thank you to Athletics Australia for the opportunity. It is an honour to be selected for the Australian team again and it is a very difficult decision to withdraw. I also want to thank my extended support team and fans that have done so much for me and who continue to support me. I’ll be back running soon! Watch this space!

Four weeks later and I find myself reflecting on my experience at the Rotterdam Marathon in quite a different light compared with a few weeks ago.

I’ll start by saying that it was tough. Yes, the marathon is tough, and that is one of the reasons why I love it. But out of each of the marathons I’ve run so far, this was the hardest one and one where I know I emptied the tank physically and emotionally. When you put everything you’ve got into training, dedicate yourself completely and fly half way across the world to race, you’re relying on everything to come together for race day. And that can be emotionally draining. You need to make it to the start line fit, healthy, injury-free, rested and carb-loaded. Then you cross your fingers that the weather and the ‘uncontrollables’ are on your side… 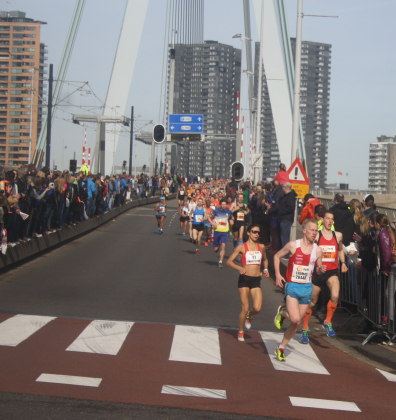 This was the first time I have gone into a marathon with a plan. In the past I’ve just run to feel, knowing that I was in shape to run a PB off the step-up in training and preparation. I had my 5K split times memorised and the plan was to hit halfway in 76 minutes with the goal of a 2:32-2:33 marathon. I was well on track until 25K, when the head wind became really noticeable and I had to push hard into it, not having anyone around me to hide behind. I passed the Kenyan female at 28K and then the Ethiopian female at 30K and put myself into 5th place, thinking that was a good sign I was still on track. It was at 35K when I saw the clock and found myself 90 sec behind my goal time! I told myself to relax, keep pushing and do my best to get on the heels of a runner ahead to find some wind protection. But there were no runners to catch and I found myself even further behind my goal pace at the 40K mark. The last two kms were a struggle and I did my best to dig deep and run hard. I crossed the finish line in 2:34:33 in 5th place. A new PB and two places above my ranking… but I was devastated.

As time went by and I debriefed with my coach, my family, and myself I felt better about my performance and the experience I’ve gained from running another big race. Of course I’m happy with a PB, 5th place, World Championship qualifier and Olympic qualifier; who wouldn’t be? But it was the time I was chasing in this one, and after a big build up, a lot of supporters backing me, a long trip overseas, and the pressure that I put on myself, it was hard to accept that I was faced with such a strong head wind on the day. That is the marathon; I love that it is tough and I never thought it was easy. There are a lot of things to learn in this event and I have identified some things to work on. So onwards and upwards, and fingers crossed I’m selected for my second Aussie team this year! 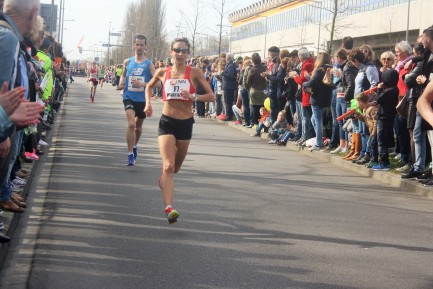 To everyone who supported my Pozible campaign for this marathon, I cannot thank you enough, and I hope I can tell you all in 10 days time that I’m off to Beijing in August! A big shout out to Tom, Mum and Coach Dick who came all the way to Rotterdam to support me, to Miranda Boonstra for a wonderful week of preparation in the Netherlands, and to everyone at home that always backs me!

Having finally ticked off a 5K road race the weekend before last, I can now say I have a 5K PB. The Mooloolaba Twilight 5K Sprint Race kicked off a great weekend of multisport racing in Mooloolaba. The short 5K distance was something new for me, and being in the middle of marathon training, my race plan was simple – just go out hard and hang on!

The start was hectic to say the least, getting elbowed on both sides as runners went out at full speed. I could barely keep up in the first few hundred meters but as my legs got going I soon caught the girls ahead of me on the first incline and dropped them on the descent. With each of the four laps of the Mooloolaba esplanade, I slowly put more and more distance between me and the other girls, and came away with the win in 16:01. With the huge volume of training I have been doing and no taper for the race, it was a great boost of confidence in the lead up to the marathon. The atmosphere was amazing, with so many friends there cheering me on. I absolutely loved it! 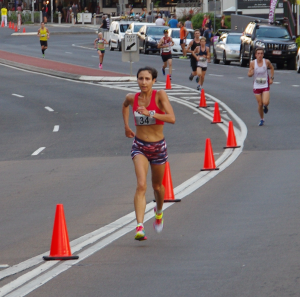 The Twilight Half Marathon last night was my last race before the Rotterdam marathon. I was under instructions to “have a solid run but not bury myself”, as we are too close to marathon day now so no risks. As Tom and I drove down to Brisbane the sky was dark and the rain was becoming heavier, not looking good for the run but it cleared as we arrived.

As if perfectly timed, the rain started again as the half marathoners and 10K runners lined up at the start line. And it became heavier and heavier, completely saturating us as we stood there. But off we went running through calf-deep flooded roads, trying to stay upright around the tight U-turns and ramps and powering through the torrential rain! It was so heavy I could barely see ahead and just followed the lead bike.

Needless to say, I was running well and leading the women in both events. But as we approached the turnaround for our second lap, which was the finish line for the 10K race, we were told the half marathon was canceled and we were all finishing at 10K. So I picked up my pace for that final 200m to come in as first female in 35:41. I was so disappointed to finish, as I was ready for that second lap and feeling really great despite the extreme weather conditions. And had I known it was only going to be a 10K race, I am sure I could have run it quicker.

I ran that second lap anyway as a warm-down and caught up with the runners on their first lap, encouraging a few to keep going. I soon understood race organisers’ decision to call it off when I saw lightning and the mad rush to evacuate the stadium.

It was an unforgettable experience and although not what I planned, it was still a good 10K hit-out for my training. Now it is officially time to taper and only 11 days until I fly over to Rotterdam for what I hope will be my fastest marathon yet. 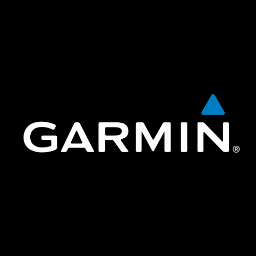